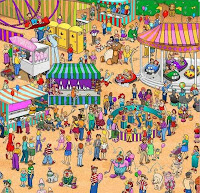 Starting with some quotes from someone who has been nothing but sober and sane (Robert Shiller) when the majority of people were drunk on the notion that houses were going to make us all rich and 20% per year appreciation was our God given right:

What have we learned from all this?

I think we've learned some very elementary lessons. Don't think that because something didn't happen for the last 30 years it won't happen. It's amazing how people thought home prices can only go up.

One thing people haven't learned very well is home prices can stay down for 30 years, too. I'm not saying it will. It certainly can happen. Most people still think this is just a temporary interruption and real estate prices are going to soar soon. The real estate market is not cheap yet. It's not to where this bubble started (in late 1998).

And one from another independent thinker:

They've got it backwards. The prices are falling because they're too freakin' high."

Enough bad news. Now for the good news, care of our friends at DataQuick (these days I like using DataQuick's numbers because when the bubble was still in inflation mode here in Marin, Marin RE bulls liked to use it as proof-positive that real estate in Marin can only go up because we are so damn special): Marin real estate was down only 16% last month (so sales that were committed to in late summer, before the recent financial shister hit the fan): 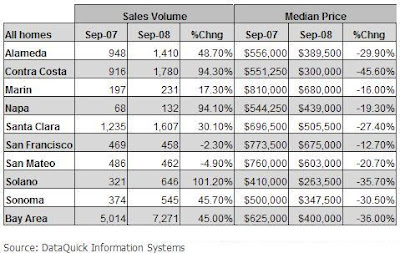 I think it is now safe to say we have a trend here in Marin. I eagerly await the unambiguous cratering of South Marin. Only then can our arrogance and hubris be taken down a notch or two (I can hope, can't I?).

Oh, and lest I forget some choice quotes from our local rag that has been nothing but a flagrant cheerleader of the housing market when "things were good" and the Marin real estate industry's poodle. But first, the article's title:

Since when do condo sales "buck up" real estate in Marin? Isn't that ars-backwards for us? What does that imply for single family residences? So bottom fishers are buying the cheapest properties. Isn't that a little like the floor dropping from under your feet?

DeSalvo [a Coldwell Banker broker] said county foreclosures weren't [!!!] confined to condominiums or property sales in San Rafael or in Novato, where foreclosures and short sales make up 30 percent of the real estate market.

In Marin, foreclosure sales - homes sold in September that had been foreclosed on in the prior 12 months - accounted for 14.9 percent of total sales, continuing a steady increase from 13.5 percent in August and single digits a year ago.

"My personal opinion is until buyers' fears are allayed and the jumbo loan market is at equilibrium, we're going to continue to see uncertainty. We're going to see this for the next 18 months."

So where are the Marin RE bulls who used to visit this blog and try to explain how confused the rest of us were? RE Junkie? Where are you? Fredtobik, where are you? (For me, the two most memorable ones; perhaps you recall others.) You were all so (how do I put this politely?)... "adamant" about your opinions. And what about the legion of anonymous realtor cowards? Where are you? You can still wear your shorts in the winter and play golf; and it's still only a two hour drive to the slopes! All your self-serving justifications and rationales are still intact. Ok, so maybe the "gas prices are going up so people will want to live in South Marin" thing isn't working out for you at the moment. But where are you? And where's that fellow who fairly recently came on this blog explaining to us why CDOs and other financial wizardry were such great ideas and, despite what we thought, were here to stay? Where are you?

Look, others had the courage to start blogs saying "it's not necessarily so" at a time when house prices were doubling about every year or so; true mavericks like Patrick.net, BubbleMeter, The Mess Greenspan Made, Mish, Calculated Risk, just to name a few. Now is your best opportunity to show us what you're made of, to stand up for what you really believe. Lay it on us...

Just one rule, spare us the "things will get better, prices always go up eventually" line of reasoning. No one here will disagree with you as it is necessarily true given our inflationary system.
- October 26, 2008

I just learned about some bad news from a friend in Mill Valley, and I'm wondering if a new trend is about to break in Marin.

He sold his last house for 1.5 million and downsized to another for 1 million. But instead of buying outright like he could have, he followed his financial advisor's advice and put all of his money in the stock market and borrowed everything with a variable rate loan.

Now he's in trouble, because he lost a lot of money in the market and he's retired. He'll have to sell his house, and I wonder what he'll get for it...

How many people followed the awful advice of a supposed "expert"? I advised my friend against all of this, and I wish he had listened.

I would show your friend this video:

In San Anselmo, I can definitely report that prices are down. Still ridiculous, but clearly off peak and very little is selling. 80 homes on the market in this little town and a whopping 8 sales last month. Good luck with that.

Neighbors are quietly scared, everyone accepts the jumbo mortgages needed to prop up these prices are very difficult to come by. But everyone still expects a recovery. That somehow, magically, the market for million dollar 1920's fixers will turn and the cycle will resume all over again. Folks in my neighborhood have spent a ton of money fixing up these old houses.

What I am seeing, is anyone who bought during the bubble years is basically stuck. They haven't made money on those houses, especially if they sucked equity out as prices peaked. With fewer first time buyers able to pay these prices, and very few bubble buyers who will be able to move, prices can only continue down as sales dry up. And if the gov't gets involved with forcing loan modifications, lending standards will get that much tighter for new loans. Interest rates will go up as well, to account for higher risk.

I'm watching Petaluma, where I want to move for the next house. Even in the nice neighborhoods, anyone who bought in 2003 or after is losing money. And I mean a lot. When I look up the previous purchase price on ZipRealty, I have to gasp. Asking prices (still too high) are $150K, $200K+ less than the owner paid a few years ago.

I think this county still feels we'll fare better, because we're special here. But I don't see jumbo loans loosening anytime soon, and that's the nail in the coffin for anyone needing to sell here.

A little worried about market declines, but the time was right for me....

…It's amazing how people thought home prices can only go up.

--Stepping around the still warm corpse of the dot-bomb, Bay Area locals rushed from one fire into an inferno. Yet-- when everything was seemingly booming in Marin and avarice hung in the air like bad perfume, any suggestion of a downturn was quickly met with condescension and ridicule, slapped across in that discreet yet chilly Marin style. How civilized.

...magically, the market for million dollar 1920's fixers will turn and the cycle will resume all over again

See how perceptions have changed—or have they? As those recent upticks in foreclosure sales volume might suggest, our local "entrepreneurs" have found yet another outlet for their vanity.

"But, but…maybe it will be different this time" Go ahead and try again, ultra-savvy, hyper-hip Bay Area. Not even Greenspan's confession will dampen your self-indulgent enthusiasm; stoop a little lower for more "froth" in the credit trough.

So where are the Marin RE bulls who used to visit this blog and try to explain how confused the rest of us were?

Where has all that noise gone? No doubt they're busy playing golf in their shorts—or taking their losses in the same. I'll openly admit confusion, such as why dinky 2 BR cottages were fetching close to $1M at peak. But in my case, a little confusion was a good thing—what's their excuse? After their incessant hectoring, it's about time for some permabull confusion. Chew on the downturn for a while, because you won't get much else for a long time, unless you find a greater fool than yourself. Creds to everyone who called this fiasco in 2005--you may have saved a family somewhere from ruin.

One of the many problems with this market and the RE industry in general is all the falsehoods, hype and out and out lies that served to inflate prices for the benefit of the very few. The reality and realization of those falsehoods is coming home to roost now all over this country, but few people outside these blogs seem to be able to connect the dots. RE (in general) during the bubble was the biggest scam yet to have been perpetrated on the American consumer / middle class. It was massive by all accounts and is finally unraveling, thank god.

The only good news (to me) is a few Wall Street kingpin thugs got taken out as they were too slow to take their hands out of the cookie jar.

There will be many false bottoms and false predictors that prices will be resuming their march north over the months and, perhaps, years ahead. As Lisa has pointed out so well, so often, the question to that is; "Oh really - how"? What's the driver if the market has choked on and now puked up these toxic mortgage products. Where are tomorrow's borrowers / buyers going to come from without these loans and easy money ?

Sorry, home prices will continue to fall until we reach historic equilibrium. Anyone in the market to buy a home better open up the history books to find out what those prices look like, or they'll be waking up each morning in a cold sweat for a while..

Here are a few graps and facts that should get your heat rate pumping this morning... from Patrick.net blog... all I can say is "wow"...

Matthew,
The household debt-to-income ratio is particularly ominous (p.21). It clearly shows this fiasco has been in the making since the mid-80s. Funny how that roughly corresponds to certain leadership at the Fed and their funds rate. Judging from the entire report, I think America is in for a major lifestyle change.

No doubt.. that one caught my eye as well.. I bet there is a strong correlation to the average American's waistline with that graph..

Lets face it, we've gotten away from what made this country great during the past 8 or so years of this bubble... the instant gratification / quick buck vs the innovation and hard work of earlier generations.. This correction couldn't have happened sooner in my book and wake people back up to the real path to wealth and happiness..

Not defending the real estate bull case, but surprised nobody has brought up the obvious. The prices of all assets are down, so Marin real estate actually looks pretty good compared to the stock market (DJIA) that is down 37% from its highs. With Marin real estate down (pick a number) 10-25%, it actually looks like a winner here and has quite a bit of room to fall before it will have ended up being the disaster that stocks have been in the last several years.