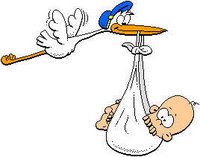 Well, there is so much to talk about today. What a difference a couple of days off, total isolation from the news, can make. I guess the big news is that the yield curve inverted today; and it looks like "exotic" loans are going to be a thing of the past (again) except for the wealthy for whom these loan types were primarily designed. Guess what happens when first-time buyers and even many move-up buyers can no longer squeeze into a house that they could not really afford in the first place when access to the most generous lending vehicles are restricted. Who knows, maybe instead of having to endure the pain inherent in a healthy solution we'll be forced into a "band aid solution" like 100 year loans.

But what really got me thinking was this post over at The Boy in the Housing Bubble blog (an excellent blog by the way and one I encourage people to visit from time to time). In his December 24, 2005 post he mentions that he has not started the family he and his partner want because they cannot afford the sort of house they think is appropriate for raising a family. One of his readers asked why it is he (and anyone else) thinks he needs a mortgage to start a family? Furthermore, many articles I read in the traditional media interview recent home buyers who say things like the reason why they got that IO neg-am loan (or whatever) to "buy" a house, claiming to know full well how crazy these things are, is so that they can raise a family. I don't mean to debate here the merits of having a mortgage or not before starting a family. Rather, what I am wondering about is how many folks are in the situation of the above mentioned blogger -- how many people are delaying having a family because of this ludicrous housing bubble? In my opinion, this is yet another negative social consequence of this housing bubble that has gone overlooked by the traditional, mainstream media. Sure, every so often we hear about schools closing because of a lack of enrollment and this might be due in part to folks not having children because they cannot afford a mortgage for the sort of house that they think is appropriate for raising children. But I wonder how wide-spread this phenomena is and what the impact will be? I wonder if when the next census is done if there will be a noticeable dip in the birth rate centering around the 2002-2006 time period? Sort of the opposite of the "baby boom"... a miniature "baby bust"?

"But who cares...I have mine." "We're making money from our houses, right?" "If these people don't or can't buy a house they're just envious losers or people who lost in a bidding war, right?"

I don't think anyone is putting off buying the houses at the expense of having a family....they have both. And this has been one of the prime driver of the market, I am sure of that.

In my case, my four year old spent the first 18 months of his life living in a small walk in closet with a window. He was a small boy and a small room fit his style.

Now he has a 2 year old brother and we have graduated to a Marin POS in tiburon. They share a room in the POS ranch house and mom and dad save hundreds of dollars a month in mortgage expense and don't waste free time fixing up one of marin's famous POS. Plus we don't incur the risks of owning and can easily leave this place when the time comes.

When tell friends, especially pregnant ones, that are shopping for a home what we did, I get a couple of reactions-

- disbelief of what I just said
- implied bad parents
- something to the effect "we need a home" implying that a home is a fundamental need to a growing child.

Well, it is a bunch of BS, but that is the current real estate bubble.

Many of these same people are the ones that get family dogs one year before getting pregnant and shopping for a home. A familiar script and one that is followed without thinking by many.

Don't confuse "home" with "house". Any place can be a home. When you are at peace and the parents love each other the the children are adored, that's what makes a home. Not a mortgage.

Really, home is a state of mind. Does a place really call home when there is a lot of debt piled into that place? What do we want our children inherit from us, lots of equity or debt?

Recently I heard people talking about reverse mortgage. Is it going to be a trend in the future?

Recently I heard people talking about reverse mortgage. Is it going to be a trend in the future?
I was wondering the same thing myself....especialy after seeing this in the SR Press Democrat
http://www1.pressdemocrat.com/apps/pbcs.dll/article?AID=/20051119/NEWS/511190391/1132/BUSINESS

Thank you moonvalley. I looked up the article and it has the following quote:

"A reverse mortgage works the opposite way. A bank loans a sum of money to a homeowner, who must be over 62 years old, but the homeowner doesn't have to pay the money back as long as he or she lives in the house. The amount loaned, plus potentially significant interest, becomes due when the homeowner moves or dies and the house is sold."

Is it really worth it? Or is it better off just sell the house and move to a cheaper place? What if the house value goes down significantly, the person takes on the reverse mortgage might owe the bank quite a lot of money.

Under some circumstances, a reverse mortgage would make sense - particullarly for elderly on fixed incomes.

Synthetically, cash out refis basically do the same thing if you use the cash to make the mortgage payments. I know of several friends that are doing this.

Yes, absolutely, baby bust. The nativist and GOP triumphalist Steve Sailer wrote an article about red states being places where families could afford houses: http://www.vdare.com/sailer/050508_family.htm
and I think it's worth looking at. I live in Northern VA, in an area with 'Marin-ish' house prices, and when my first kid was in kindergarten his teacher told me that of 23 in her class, ten were onlies, ten were from families of two, and only three were from families of three or more. The parents are old - in my daughter's day care, mid 30s to mid 40s. When you start that late, one or two is all you are going to have, usually. And there are a lot of fertility clinics around here getting rich on the inability of folks who waited to have the kids they now think they can finally afford.