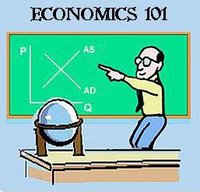 Well, it looks like there's trouble brewing in one of Marin's vacation housing hot-spots: Placer County. Naturally, the realtors are all saying 'things are just fine', 'the downward slide is healthy', 'it's a more balanced market', 'we're cruising in to a soft landing', 'we saw this coming all along', and other soothing and placating phrases. Whenever a realtor uses phrases like "it's Economics 101" you know they are not telling you the whole story.

After reaching a 12-year high in October, the inventory of homes for sale in Placer County remained high in November - a 137 percent increase over last year at this time, according to PCAR statistics.

The real estate market is seeing more houses for sale, but fewer purchases being made, and that's leaving some sellers in a bind.

"It's frustrating. We've had several people who want (our house), but they have to sell their place before they can make an offer on ours," said Kari Vollmer, 43, of Auburn. "And we keep finding places that we like, but we have to sell ours first." Vollmer has seen her three-bedroom home drop $200,000 in asking price.

"The market sort of all of a sudden slowed down," Vollmer said. "What I keep hearing is right now it's a buyers' market. It's like, 'OK, I'm a buyer, but I have to sell too.'"

One thing that real estate agents seem to agree on is that the market is neither a buyers' nor a sellers' market at the moment. Instead, they describe the market as leveling out or becoming more balanced.

"On the national level, they call it the market coming in for a soft landing"

"There's a decreased buyer pool and increased inventory, which spells out not being in a sellers' market anymore," she said. "We're leveling out, that's all."

"People are going to be selling because they have a desire to sell," she said. "And buyers are not going to be buying out of fear anymore. I think it makes for a great market."

Newton said that Placer County buyers are still pausing to see where exactly the market is turning, and he said that many buyers are "optimistically" waiting for lower prices. But not all purchases are made solely as strategic moves with an eye on the market.

"Buying is still an emotional experience," he said. "You still have the human aspect of what's happening on the market, but you also have that logic that's starting to take over."

The surest way to BS someone as a real estate agent is as follows:

1. Be a woman (otherwise this doesn't work)
2. Say it with a cheery voice
3. Smile while saying it
4. Repeat the following at least 3 times before saying it out in front of a buyer so you get time to get "the giggles" out when you say it.
5. Say the following "{insert absurd comment here}, that's all."

I am confident that Mary Jane Mahoney has never taken an entry-level economics course in her life. However, she has obviously invested heavily into the Gary Watts BS Course. Her comment of "We're leveling out, that's all." fits the above exactly.

I re-post below my observations (from housingbubble2) written three days ago of this market area:

"I spent part of the weekend in the mountains.

Poked around a dead open house at a condo complex in north Tahoe (a summer resort/ski town area), where a recent mailer talked of a soon-to-be 'normal market after some slowing.' Same flyer quoted somebody saying that California home prices will go up 15% annually over the next several years. They apparently believe that greater fools are not in short supply (in north Tahoe, most homes have doubled in price in three years).

Saw large advertisements in the Saturday Sacramento Bee for new houses in that area where the builder will pay the first three months of the buyer's mortgage. Hmm... no doubt this is cheaper for the builders when so many buyers are choosing I/O's (true, but I'm also being sarcastic).

And finally, my very own Kennedy/Baruch moment came this weekend at a popular eatery up there, when I learned that our ski bum waitress and her boyfriend bought a second house. First one was about a year ago, if I recall (I would say this doesn't bode well - for he's not a trustafarian).

Oh, almost forgot - and she's working part-time to become another one of those several hundred thousand licensed brokers in CA, adding to the 2% of the adult population in the state who already are licensed."

sf jack said...
...where a recent mailer talked of a soon-to-be 'normal market after some slowing.' Same flyer quoted somebody saying that California home prices will go up 15% annually over the next several years.

I am all but certain that the person they quoted must be Gary Watts. He's an OC real estate tool who is making money hand-over-fist by touring around and giving inspirational messages to "up and coming agents". He's like thier evil god and they become his minions of propaganda. I did a write-up of him on my blog and his unrealistic predictions for the next 3 years. Never did my blog attract so many Pro Watts trolls as that single post.

Part of me wishes that residential real estate were considered a serious investment vehicle. If it were, Mr. Watts would have to take responsibility for his investment advice and predictions.

If financial analysts dispense advice about how Google stock was guaranteed to go up 15% next year, don't you be there'd be lawsuits if it went down 5%?