This is what I see over at DataQuick for January, 2006 data: 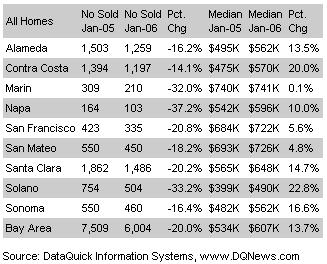 And this from DataQuick for the December, 2005 data: 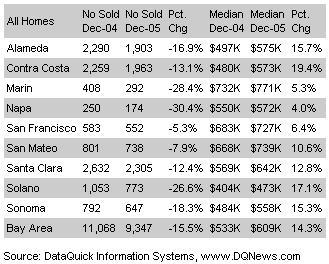 And let's not forget what West Bay RE said:

So let's compare all of this:

So there you have it -- Marin's year-over-year real estate median price appreciated either a paltry 0.1% or 2% (either way a loss after taking inflation into account [real or otherwise]) or declined -5.7% depending on whose data you want to use and whether or not you want to throw condos into the mix (the Marin Assessor's figure combines both SFRs and condos and I am guessing that the one for DataQuick also combines the two whereas the IJ and West Bay RE figures are presumably just SFHs). We will have to wait until who-knows-when for the data from the Marin Assessor's Office.

It is interesting that the Marin IJ's figures and those of West Bay RE's, both of which presumably do not include condos, show such disparate results; the IJ's is positive whereas the realtor's is negative and the difference is nearly eight percentage points. I won't speculate on what that might mean.

I will say this however, it sure would be nice if property sales data were made publicly available by a disinterested third party so that these analyses would not only be more straightforward to do, but could be done more easily and by anyone. As it is, the industry covets the data and only shares bits and pieces. The truth is out there and sooner or later we will know what it is.

I hope you found this useful.

Update: It is good to keep this in mind when thinking about where prices are ultimately headed:

"At some point we have to come to grips with the basic affordability question. This is not an affordable market," said Stephen Levy, director of the Center for the Continuing Study of the California Economy in Palo Alto. "I think prices could drop, and once these things start, they have a snowball effect."

Levy, who estimates prices could drop by as much as 20 percent in the next couple of years, said rising interest rates are quashing the segment of buyers who can only get into the market using riskier, adjustable loans, such as interest-only mortgages. Such products are attractive because they usually carry lower initial monthly payments than traditional mortgages. But when principal payments come due, those payments jump -- even more so if interest rates have risen.

"People chose to bet on future appreciation by choosing loans where they knew payments would go up by a lot -- but they got in cheap," Levy said. "There are no cheap loans now."

Great post. I must admit, I wanted to flame the IJ as being beholden to their advertisers, but perhaps the condos are the source of the discrepency and not their working the numbers in their own interest.

At least, at this point we can state that the trend has changed.

I should also say that these results are typical during the December to January transition; in March sales always seem to rebound sharply. This RE market has been defying rationality for quite a few years now and I doubt this year will be any different. But the fact that y-o-y prices are giving way is what I find interesting as this has most certainly not been the case the last few years. So what is about to happen -- continuing y-o-y price declines or business as usual -- is anyone's guess at this point.

Yes, I started out really wanting to flame the IJ but after looking at the data myself I have to be honest and admit that they are probably just looking at the SFR results and not including condos. So the IJ is off the hook (this time ;) )

as far as West Bay RE's data is concerned, prices are eroding in Marin.

Hey Marinite,
Not only do I get good info. from this site but it also serves as a way for me to get info in all parts of CAli as well.

...said Jack McLaughlin..."We are developing what I would call a healthy, balanced market."

schlegel said .... "Now is the time for buyers to think about hopping on because the train will go forward with prices continuing to increase over the long term."

Schlegel said concern for significant price decline in Marin is minimal because there is little new construction and people are still moving into the county. -Marin IJ

These use of "realtor as expert" quotes is really starting to irritate me. When are they going to call a spade a spade? Marin's population is in fact dropping and rents (which I have concluded are a far more accurate barometer of demand) are stagnant.

When are true market experts, such as Ken Rosen at UC Berkeley, going to be quoted for these pieces instead of RE industry shills who have an built-in conflict of interest every time they open their mouths?

This is downright irresponsible "journalism". And being the IJ of course, I use the term loosely.

I just read the Chronicle link and see that they actually talk to a diverse group of people about their feeling in the market so that there at least appears to be some degree of balance to the article.

I just need to stop reading the IJ because it is truly the biggest PoS in Marin ;-)

Great report. I wonder how much Joe Public is aware of these recent YoY comparisons.

But the fact that y-o-y prices are giving way is what I find interesting as this has most certainly not been the case the last few years.

My bubble market is popping sooner than your bubble market (at least according to the demigods at DataQuick). Boy, I was so worried that Marin had actually beat us to 0%.

You bet, in spite of Fed "advisories." Interest rates to 5.0% at the April meeting? I'll bet five cents they are.

But, the Fed will pump pump the liquidity to keep it going. And, after March they won't print M3, and you won't know exactly how much liquidity they're creating because when they decided to not print M3 two months ago, they knew full well they'd be forced to push money out of helicopters.

After all the Fed is the Banking Cartel.

Will too many ARMs reset before summer? And, really blow up inventory. Maybe. Change is coming no matter how you look at the data, straight on, or upside down.

Time will tell. The slight money drop in January is also of some interest.

If the Fed does flood the economy with more liquidity (and hiding the fact by no longer publishing the M3), won't that further erode the dollar and require higher long interest rates to keep foreigners buying our debt?

Another thought occurred to me is that the US dollar is really backed by the fact that it is the world's reserve currency which itself is backed by the fact that oil is denominated in dollars. Iraq, Iran, Venezuela (who else) are (were in the case of Iraq) trying to redenominate their sales in terms of euros. Since we cannot invade and occupy everyone who tries this (or can we?) how long can the US keep this game going?