It's Faster This Time? 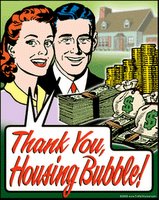 I found this post here and felt that it needed repeating. In case you don't already know, "REO" is short for "real estate owned" -- the amount of real estate repossessed from borrowers by banks.

I know, I know this can't happen in Marin. In San Diego, sure, but not Marin. We're immune -- too rich, too sophisticated, too so-much-better-than-everyone-else, too whatever. But the rest of the state is just so f***ed.

Or maybe it's just apocryphal; you decide:

I'm the former RTC REO Marketing Analyst, but prefer to be Anonymous because I know some people are going to become very alarmed and very angry when I discuss what happened the last time.

When I left the RTC at HomeFed Bank in 1991, the RTC was in the process of closing down. It was the tail end of that cycle.

Mortgage defaults and bank REO are increasing rapidly already as of today. Keep in mind that banking regulators will never give lenders leeway to play the market so to speak, or hold on to REO in the hope of an improving market to get a better price or to cover their nut (i.e., mortgage). They HAVE to get those non-performing assets OFF their books. I have lots of stories about those days and I'm convinced this time it will be far worse because back then we didn't have any of the Geo-Political crises we have now (rampant illegal immigration, wars, we're a bigger debtor nation, we have a bigger trade imbalance with China than we ever had with Japan I'm sure, etc., etc.), interest rates that were artificially depressed to levels not seen in 40 years, dangerous and irresponsible lending products, and because the advent of the internet now facilitates the free flow of information much faster. Look at all the housing bubble blogs there are with all the reliable data they are providing. It's almost an avalanche of data supporting why all but the most ill-informed should not be looking to buy for at least 2 years.

I remember telling people in 1989-1990 that the writing was on the wall and nobody listened because there was no publicly available data (brokers like me knew based on MLS data only available to members) to cite in support of the impending crash, and the media, especially newspapers, weren't going to report it because their largest advertising constituency is Realtors/brokers.

With the internet and the info that is available on it, you'll soon see the amount of time it takes for real estate to crash significantly compacted this time. Just look how fast things have turned bad since just before the holiday season started last year.

Homeowners are now increasingly starting to put their homes up for sale to get an early start on the summer home buying season, and some are just now realizing how inventories on their local MLS's have tripled, quadrupled and worse. As of today, ZipRealty reports that San Diego is just about 4 weeks away (based on the average daily increase in inventory I have been monitoring since late last summer) from breaking the old record of 19,250 during the last down cycle.
I know some have said that you can't use that figure because San Diego has a larger population today, but I disagree and here's why. There are far more FSBO related companies today than 15 years ago because of the Internet and collectively, many of their their thousands of listings are not included in the ZipRealty figures. Also keep in mind that last year population in the County went down, and don't be surprised when it goes down again after this year finishes up.

Look how the tone of articles from mainstream media in the last 2 months alone have changed. Panic has already set in for many, but they have no idea how ugly it will get.

The one thing I'm always amazed to find out is how many borrowers think that when their home goes back to the bank, that's the end of their problems. What they don't realize is that if the lender writes off or forgives any debt to them (i.e., short sale, etc.) the former borrower will get a 1099 for the amount of that forgiven debt as though they had received it as income. If they sold their home through a short sale at the begining of the year and they got a 1099 by January 30th of the following year, they not only have to pay taxes on that forgiven debt, but now penalties and interest too, because it was due (unless you pay estimated quarterly taxes) at the time the debt was forgiven. I personally knew a borrower who had 11 rental properties and after he lost the first one to foreclosure, he got hit with a huge IRS penalty. He started selling off the others, but had huge tax hits because of depreciation recapture, and because the market was getting worse, he could not sell some for what he owed. I was an underwriter at the time and on paper, just prior to losing his first property he had equity of over $1,000,000; but in the end he lost it all because he couldn't sell in a market where bank REO dominated, and when he tried, the tax hit from depreciation recapture buried him further.

The same sheeple psychology that drove everyone to ignore cash flow fundamentals by flipping condos and homes based on the greater fool theory, will invert like it did in 1990, and for the next few years you'll hear nothing about real estate except how terrible of an investment it is, and it will be true for those who either bought with high leverage or refinanced with max cash out based on the value of their homes in the last 2 years.

And anyone who says rents will catch up to all the adjusting I.O. and ARM loans is in fantasy land. Between 1990 & 1994, I had my landlord reduce my rent three times by simply giving notice that I could rent a better condo at the beach for less. And you know why that's possible? Because of all the bank REO that was (and will be again) unloaded on the market. Owners who buy REO can easily compete on price alone. Market rent is meaningless to them. I rent a $750K place now and have been renting since we sold our residence in 2002 and our rent is under $2,000 and in the 5 years we'll have been here, the rent will have only increased by 3% from 2002 through 2007.

To those who ask how long to wait and how low will it get, here's my answer. Even though the Internet will compact the time it takes to crash, I still say don't even think about buying for at least another 18 months. Don't be fooled by ocassional news or market conditions that lead you to think things have turned better because that always happens on the way down, just as it does with stocks on companies you know are "Dead Man Walking".

As far as the percentage, don't think in terms of what percentage it will go down relative to the overall market, but what discount you can get on hardship situations, like bank REO. I think you will be able to get property for 20-30% of what it appraised for in 2005. Trust me. Even if you don't for whatever reason, others who are diligent will.

That is one amazing article.Thanks sooooooo much for posting that. We've just leased an 850k house on a third of an acre for just under 2k a month. We have a two year lease. We figure about that time it'll be cool to buy.
I'd send the article around to friends, but they already think I'm the RE Cassandra.

I've never lived anything devastating yet I'm ultra conservative. I'm amazed people didn't see this coming. In my mind, it was obvious!

Why is it that some people can see the domino effect, even without having lived it and others can't?

Has anyone ever read or done research on this?

Heck! We won't need to bust MALT!!
There's gunna be so much cheap property around here.
SWEEEEEET!

Are You With Me On This?

Great article. Thanks for posting it!

Cole @ The Boy in the Big Housing Bubble