Deflation is More Likely than Hyperinflation 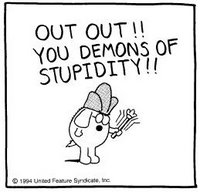 The depressive side of my bipolar personality kicked in with full force recently and I was certain that I was going to let this blog (and the others) die and not post anymore. Well, I still feel that way but that part of my brain that wants to get important info out to anyone who is receptive to it kicked in despite my overwhelming sense of apathy and despondency and so I have to make this post even though I know no one cares and would rather look the other way and see what they want to see.

Also, just so you know, plotting the minutia of Marin housing data is wearing thin so I am going to try to move to an every-other-month schedule, if that.

Oh, and I've turned off comments for now because only like 0.1% of the people who read this blog actually bother to leave any comments and I'm tired of moderating what few are made. You can still email me (just remove the no-spam stuff that I added to the address).

"The problem today is that not some individuals or corporations or governments, but the entire system is saturated with credit. Worse, much of that credit is propping up other credit, and this nth-generation credit is propping up the financial markets. When the financial markets go down, IOUs will come due. Conversely, when IOUs come due, markets will go down. People who must finance debt to maintain their standard of living will soon be selling everything and anything to stay afloat. When people on the edge are strapped, they will sell their investments to pay the interest on their debts. If they won't do it themselves, their creditors will do it for them. Banks are already repossessing homes at a furious pace. In Georgia, April foreclosures were up 300% from April 2005. This is only the beginning. . .

. . .Pundits tell us "We are in a hyperinflation, like 1920s Germany." No, we are not. In the early 1920s, the Allies told Germany to pay reparations that Germany couldn't afford. It found a practical solution in printing marks. The inflation of the past 73 years in not primarily currency inflation, but credit inflation. Credit can implode in a deflationary depression; currency cannot. Once currency is printed, it's out there for good. Some people argue that the Fed will print currency at a hyperinflationary rate, but that's a guess at best, and so far all we have seen is the same old game of facilitating credit. . . After it is obvious that credit stimulation has failed, hyperinflation may be a "last resort," but I stress the word may. In the 1930's it was no resort at all; the Fed opted to stay healthy instead. So before hyperinflation even might become a threat, you should be able to get wealthy betting on the downside. Even if you don't wish to speculate in that direction, you can get wealthy simply by maintaining your money and then employing it at the bottom."

These are the theories, basically similar in nature, from the people who make their living thinking about such things. Of course, you don't have to take their word just because they're "experts." Does it make sense to you?

The common hyperinflationary wisdom seems to be that the Fed will simply be able to "print" money to avoid a deflation. This is the idea that Bernanke so ineloquently expressed, landing him the chief job at the Fed and giving him the nickname "Printing Press". Yet Prechter raises a subtle, but very important point - the Fed does not print money per se, it issues credit, and there is a big difference. Credit can simply disappear, while currency that has been printed cannot. All the analysts quoted above assume that people/entities will liquidate assets to raise cash in order to service their debts. (Prechter notes that if they won't do it their creditors will do it for them!) But others will simply walk away from their debts. This, too, is deflationary. One man's debt is his counter party (usually the bank)'s asset, so if he defaults, suddenly the bank has fewer assets and merits a lower stock price. The stock of the bank, is of course, someone else's asset, and thus begins the game of what Greenspan called "cascading cross defaults." There is little question that cascading cross defaults are deflationary -- assets plunge in price and the stock of cash rises quickly because people desire to be liquid.

One thing that is clear, the cost of money - i.e the cost of borrowing, or the cost of credit - is going up, in the form of interest rates. John Mauldin makes an excellent case for the Fed not being done with raising rates, even though everyone seems to think they are. As the cost of money goes up, demand decreases. Decreases in demand lead to a slowing economy. A slowing economy leads to people out of work, who can't service their debts, leading to defaults. Then we get to the point that the three analysts above are talking about above . . .