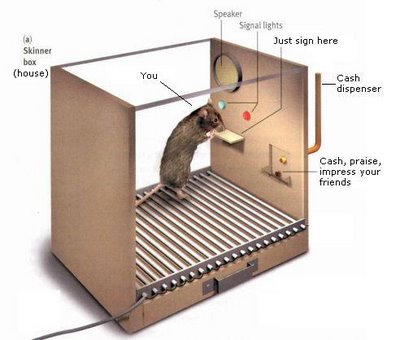 Operant conditioning, sometimes called instrumental conditioning or instrumental learning, was first extensively studied by Edward L. Thorndike (1874-1949), who observed the behavior of [people] trying to escape from [the box of not being perceived as wealthy]. When first constrained in the boxes, the [people] took a long time to escape. With experience, less effective responses [e.g., actual work, saving, delayed gratification] occurred less frequently and more successful responses [e.g., borrowing money, instant gratification, short-sightedness] occurred more frequently, enabling the [people] to escape in less time over successive trials. In his Law of Effect, Thorndike theorized that successful responses, those producing satisfying consequences [e.g., spending, praise], were "stamped in" by the experience and thus occurred more frequently. Unsuccessful responses, those producing annoying consequences [e.g., having to save for retirement or for a downpayment], were stamped out and subsequently occurred less frequently. In short, some consequences strengthened behavior and some consequences weakened behavior. B.F. Skinner (1904-1990) built upon Thorndike's ideas to construct a more detailed theory of operant conditioning based on reinforcement and punishment.

Reinforcement and punishment, the core ideas of operant conditioning, are either positive (adding a stimulus to an organism's environment [e.g., easy credit]), or negative (removing a stimulus from an organism's environment [e.g., you need more than a pulse to get credit]). This creates a total of four basic consequences, with the addition of no consequence (i.e. nothing happens). It's important to note that organisms are not reinforced or punished; behavior is reinforced or punished.

- Reinforcement is a consequence that causes a behavior to occur with greater frequency [e.g., if you take out a HELOC you have more money to spend, score with the ladies, can go on a fancy vacation, get accolades from friends and relatives].

- Punishment is a consequence that causes a behavior to occur with less frequency [e.g., you have to pay it back]. According to Skinner's theory of operant conditioning, there are two methods of decreasing a behavior or response. These can be by punishment or extinction.

Four contexts of operant conditioning: Here the terms "positive" and "negative" are not used in their popular sense [i.e., "good" and "bad"], but rather: "positive" refers to addition [e.g., receiving cash, praise], and "negative" refers to subtraction [e.g., not receiving cash, praise]. What is added or subtracted may be either reinforcement or punishment. Hence positive punishment is sometimes a confusing term, as it denotes the addition of punishment (such as spanking or an electric shock [or debtor's prison]), a context that may seem very negative in the lay sense.

The four situations are:

1. Positive reinforcement occurs when a behavior (response, [taking out a HELOC]) is followed by an appetitive (commonly seen as pleasant) stimulus [impressing your friends and relatives because no one but your lender has to know where the money really came from] that increases that behavior. In the Skinner box experiment, a stimulus such as [praise] is present when the [person] [takes out a HELOC].

2. Negative reinforcement occurs when a behavior (response, [taking out a HELOC]) is followed by the removal of an aversive (commonly seen as unpleasant) stimulus [disrespect from your friends and relatives because you are not successful] thereby increasing that behavior [taking out a HELOC]. In the Skinner box experiment, negative reinforcement is a loud noise [no more "you're a loser"] continuously sounding inside the [person's] [life] until [he] [takes out a HELOC], when the noise ceases.

3. Positive punishment occurs when a behavior (response) [being prudent, saving, and not taking out a HELOC] is followed by an aversive stimulus, such as introducing a shock or loud noise [e.g., or condemnation from friends or relatives, everyone else is doing it, everyone else can afford that Hummer or fancy vacation], resulting in a decrease in that behavior [e.g., saving].

- A type of learning in which a certain behavior (usually negative) is not done in an attempt to not receive a punishment is termed avoidance learning.

- Extinction is a related term that occurs when a behavior (response, [taking out a HELOC]) that had previously been reinforced is no longer effective [e.g., interest rates went up, you house went down in value, etc.].

Hahhaahaha... never been a fan of Skinner myself, but I liked this article. Gives new meaning to "sheeple." Yeah, amazing how easily the masses can be manipulated, unless they carry with them an internal sense of ethics, morality, and the bigger picture.

BF Skinner is generally unliked because of how he insisted that the principles of operant conditioning (in particular) and Behaviourism (in general) apply to people and human society and not just mice and rats. It's more of a human ego thing (not liking to believe that human behavior can be governed by such emotionless, near-robotic, and nonconscious behaviourist laws). It's the same sort of "problem" some people have with Darwin and the idea of evolution. But the principles of operant conditioning being applicable to human behaviour and human society cannot be denied; there's just too much evidence supporting it.

I love the diagram; creds to the artist. In this case, I imagine the Skinner Box slowly filling with water, as the FB nervously hits the money dispenser.

I seem to remember animal research which allowed monkeys to choose between a cocaine fix and food. The monkeys would invariably choose the cocaine fix until it killed them. Well, of course they would chose the cocaine, if they didn't have to pay for it. And of course, people will choose to buy overpriced houses, if they think that they won't really have to pay for them. But once the phony appreciation ends, the bills come due.

Yes, the earliest study I know of is this one --