People are getting so desperate to sell their obscenely overpriced houses that they have to offer all sorts of "incentives" to sell; anything but actually lowering the asking price to the point where it can sell in today's market. These sorts of "price reductions" never appear in official statistics (e.g., from the NAR, CAR, etc.) no doubt because it would take some effort to measure them and would make the real estate statistics look even worse than they already do.

Previously these sorts of incentives only happened "over there"... in "armpit" locations (to use a common Marinism). You know, in Sacramento, San Diego (or Southern California in general), Vegas, etc. Never in Marin.

I've already pointed out some instances where Marin sellers had to offer incentives (e.g., here, here, here, and who knows what else), but this one, featured front and center in The New York Times, has to take the cake: 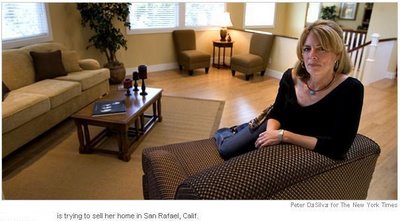 ...consider a three-bedroom house surrounded by oak and redwood trees, not far from the Golden Gate Bridge, in San Rafael, Calif. Reluctant to cut the price from its current listing of $1.54 million, its owners are instead offering a weeklong vacation time-share, every year for life, worth about $10,000, or an equal amount toward lease of a car.

Apparently, one of the owners is being transferred to Atlanta and so there is some urgency to sell.

With very little effort I was able to find this house listed at ZipRealty.com. Here is a picture of it along with what the listing agent has to say: 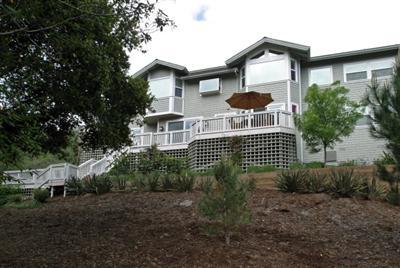 Constructed in 2004 in the exclusive baywood terrace estates. From the moment you step through the dramatic entryway onto the bamboo floors, the open floor plan will beacon you with luxury. The chefs kitchen and great room features custom cabinetry. The living room adjoins a cozy den, and adjacent deck and fireplace. All bedrooms are suites. A lower level family room opens on to a large deck and to the beautifully landscaped huge yard with spa.

It's a nice house to be sure (I visited it when these houses were first made open to the public, but it's in a rather shabby area) but no mention of the vacation time-share for life thing in that write-up.

From the NYT article:

The use of rebates helps home builders and individual sellers by making the real estate market look healthier than it may truly be and by preventing a snowballing decline in home prices. It also keeps commissions for real estate agents higher than they would otherwise be.

At some point these incentives won't work. Afterall, you are better off getting a price reduction, so as to lower the property tax you have to pay year after year after year, than these sorts of incentives.

BTW, I was able to look up the loan details (type, amount, etc.) since the NYT decided to publish the owner's name. But in deference to certain readers it has been omitted. But you might be surprised.

"Reluctant to cut the price from its current listing of $1.54 million...

Some readers may have noticed another nearby home on the market, same BR/BA sqft, similar price. I suppose it's a matter of which seller blinks first? Time to undercut the other guy.

"But in deference to certain readers it has been omitted"

It is your blog, own it.

Is there a service for that or do I have to go the county office or something?

its owners are instead offering a weeklong vacation time-share, every year for life, worth about $10,000, or an equal amount toward lease of a car.

Excuse me, but exactly how is that adding $10K of "value," or broadening your buyer base? Seems to me that offloading a timeshare may be seen as a liability to many buyers. That's like saying "free horse thrown in with purchase of home--a $10K value!"

"Excuse me, but exactly how is that adding $10K of "value," or broadening your buyer base? Seems to me that offloading a timeshare may be seen as a liability to many buyers. That's like saying "free horse thrown in with purchase of home--a $10K value!" "

Good point, people around my office are begging to sell their timeshares, my favorite quote "if you are going to spend 2k on vacation this year, by my timeshare for 3k, it is in a great location". But lets be honest dumb people do dumb things, like buy houses they can't afford, and timeshares they don't want, cars they don't need etc...

How does one get the loan details? Your earlier posts said it was at the recorders office, but is there an online version?

This is why prices will drop like a rock. That place has nothing going for it - looks like white vinyl windows, bamboo (can we get any cheaper?) floors, crap siding, long commute...and they want 1.5 million for it? You can get a real nice place in the Berkeley Hills for that price - great views, close to shopping, walk to BART, and no trees that might catch fire (they already did).

Dataquick.com is a online service that gives you historical data. Investors, Appraisers, Reagents and the like use this service to get this data. It's also at the county recorders office. Just learn what a deed, trust deed, reconvayance, recission are and you'll be fine.

Oh and this is just the tip of it...you'll see this for the next five years or so.

the snowball has started rolling in the foothills and it is on its way.driving back from the sierras i heard ads from a builder in lincoln announcing a "half off" sale every five minutes.milliion dollar homes now from $500k.these were on several stations.the thought of a million dollar home in lincoln is bizarre ...and somehow half off doesn't entice me...

I wonder why they didn't drop to $1.3 Million, to the purchase price...probably because they liberated the equity and now they're stuck.

I read your posts and am a bit surprised by the anymosity of your posts. There are extremes indeed in Marin, however, if you buy properties in Marin with a long term perspective, they will appreciate.

Also, baywood terrace and other such developments in Marin or around the Bay Area do start by being located close to less desirable areas but that usually tends to lift the area in the long run. Case in point, there are houses right next to $500K houses that have sold for $1+ in the last two years.

Thought I'd add some balancing arguments.