What Decade Is This Anyway?

So like this author says, you could almost forgive the current generation for falling for the housing bubble since normally bubbles skip generations; absolution could be found by claiming that the lessons of the grandparents are lost on the grandchildren if for no other reason than "that was so long ago; it's different this time". But come on, two bubbles within a 10 year span?! No excuses for that. I realize the Fed, lenders, real estate agents, and others can be blamed for playing the part of the enablers, but certainly the people who "pulled the trigger", who decided it was a good idea to take out all those toxic loans and/or accrue crushing amounts of debt and/or "buy" numerous houses and/or HELOCing away their equity share in the blame. So I wonder how future historians will describe the current group of people alive today. And what will our children think? The 80s are referred to as the Decade of Greed but I think the 80s pale in comparison to the true Decade of Greed -- 1995-2005. Or will these future historians label us as something else?

In any case, no need to re-invent the wheel to understand where we go from here in the housing bubble. The dynamics of a collapsing speculative bubble was stated elequently in John Kenneth Galbraith's, The Great Crash (Houghton Mifflin Company, 1954):

From the foregoing it follows that the crash did not come—as some have suggested—because the market suddenly became aware that a depression was in the offing. A depression, serious or otherwise, could not be foreseen when the market fell. There is still the possibility that the downturn in the indexes frightened the speculators and led them to unload their stocks, and so punctured the bubble that in any case had to be punctured some day. This is more plausible. Some people who were watching the indexes may have been persuaded by this intelligence to sell, and others may have been encouraged to follow. This is not very important, for it is the nature of a speculative boom that almost anything can collapse it. Any serious shock to confidence can cause sales by those speculators who have always hoped to get out before the final collapse, but after all possible gains from rising stock prices have been reaped. Their pessimism will infect those simpler souls who had thought the market might go up forever but who will now change their minds and sell. Soon there will be margin calls, and still more will be forced to sell. So the bubble breaks.

What's the federal government going to give us this time? More tax cuts? More deficit spending? Seems like those bullets have been spent. What happens when you cut interest rates when oil is trading at $75 versus $20 as in 2001 and you have wars raging across the Middle East?

Fasten your seat belts. It's going to be a weird ride. 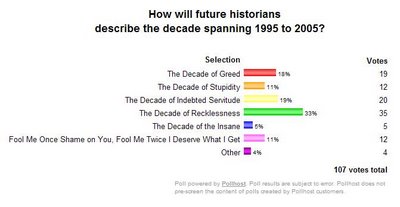 You didn't mention what happened in Marin County R.E. during the late-70s. Housing was being repriced as so many baby-boomers were buying first homes and first move-up homes.

At the time, a handful of speculators known to all the real estate agents were buying anything... as long as it could be purchased with nothing down (or cash back at sale). I spent a summer interning with a broker who owned about 30 Marin County houses. He lived off of tax-free cash-out refis for several years then lost it all.

Back then I was a kid who worried a lot about nuclear armageddon and the Great Trashing of the Planet (really, it bothered me a lot). The cost of housing was the last thing on my young mind.

So, if you were awake enough then to remember, then please write something up and I'll post it. I am sure it would be of great interest to the roughly 1000 daily unique visitors to this site.

Back then I was a kid who worried a lot about nuclear armageddon...

I know the feeling. We were basically at ground zero, located near Boeing and a nuclear sub facility.

The area had already seen a big slump due to an aviation downturn aka "last person leaving Seattle please turn out the lights". Five years later, real estate was just picking up again. That said, the bitching about housing was largely absent amongst friends. Back then, a decent single-salary family could buy a new, custom-built waterfront home. That's hardly the case for Puget Sound homes now.

Ah, the late 70s. When my folks picked up 3 brand new condos at $50k a pop and 1 Eichler for $105k with little or no money down (actually the Eicher was a 103% deal). THAT was a bullish RE market. Damn, I wish I was old enough then to hold title to property.

And they still own them, now debt-free, despite that "toxic" financing.