Where Are Our School Children Going? 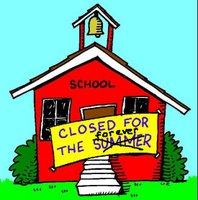 This is why this housing bubble (in particular) and speculating in housing (in general) is so nefarious (thanks to the Sacramento Land(ing) blog for the link). People are leaving the state in droves and taking their families with them. It's not just Marin or other over-priced areas with over-inflated egos to match. It's now the whole damn state.

Fortunately, we are not at crisis levels yet. Unfortunately, that means no one will so much as lift a finger to deal with the problem or even acknowledge that a problem exists. But come on, be honest. Is this normal? Is this what we want? Do we really have to wait until it becomes a crisis before we start talking about it? Do we really have to hope that "market forces" will correct the problem? Frankly, the way houses are bought and sold is biased towards increasing in price so I really don't see how "market forces" are going to fix this problem long-term. I mean, just look at where these exalted market forces have led us to today!

To my mind the solution is to remove the profit incentive from buying and selling houses and/or to make speculation in housing so difficult that no one would want to do it. But I'm just a 'crazed prophet' after all so here are some ideas that readers of this blog shared.

Over the last seven years, nearly 400 students have left the public school rosters in Santa Barbara. Enrollment in this wealthy, Spanish-tiled coastal haven has dropped as steadily as home prices have risen. It is a trend expected to continue as the median home price pushes past $1 million.It is also a trend that increasingly appears to be occurring across California.

Public schools circling downtown Los Angeles are losing students as their neighborhoods gentrify. A similar shift is underway in the Bay Area, Sacramento and Los Angeles, and Orange and Ventura counties. Statewide, public school enrollment was down slightly this year, for the first time in nearly a quarter of a century. And though officials aren't quite sure of all the reasons behind the drop, they are sure that the cost of housing is one of them...

In the 2005-06 school year, statewide school enrollment dropped for the first time in 24 years. There were 6,313,103 pupils enrolled, a decline of about 10,000 from the previous year, according to state Department of Education records.

She said several factors could contribute, including local job losses, changes in migration patterns and lower fertility rates. But a major trigger, analysts say, is the state's sky-high housing market. Student losses appear to be highest in high-cost coastal regions, especially around Los Angeles and the Bay Area. Housing prices in those regions are among the highest in the state, analysts note...

..."It wasn't that long ago that we couldn't build schools fast enough," said Hans Johnson, a demographer at the San Francisco-based Public Policy Institute of California. "Now we've switched to which schools to close."

This housing bubble in California put's a whole new twist on the bumper sticker (once popular here in the Bay Area) that read "Welcome to California, Now Go Home". Yes, welcome to California. But if you are thinking about moving here, well, think again. You are probably better off calling someplace else home.

have you found any stats regarding families with children leaving Marin. As a parent, I can tell you that the schools in the Ross Valley district are pretty impacted? It appears to me that the district has not expanded school facilities in decades. I went to Dixie so I don't know personally how the schools have changed.

have you found any stats regarding families with children leaving Marin.

One of those links in the post has what you are looking for I think.

I am not planning on leaving California because of the high costs. The high costs are a side result of the culture here; It's the culture that contributes to the excessively high housing costs, piss poor schools, etc. This repugnant culture is what I am trying to avoid, and I especially don't want any offspring to grow up in this environment.

"This repugnant culture is what I am trying to avoid..."

I hear you on that. Once residing in the heart of dot-com VC circles, I had to make a quick exit for my own sanity. With the dot-bomb, I thought I'd seen the demise of some more odious cultural habits: nonstop self-promotion and money schemes, totally reckless consumerism, and lock-step belief in unproven, yet "sure-fire" business models.

I was wrong; the corpse is still walking. The tech crash was but a pause in a mad dash towards nonstop consumption. The housing bubble is simply a symptom of pandemic self-gratification.

I can't speak for Marin county, but in Southern California, one reason middle and upper middle class people pull their kids out of public schools is lack of safety, especially at the high school level. Some of these kids wind up in private schools. Others just leave the state.

Nissan just moved its American headquarters from Gardena (in LA County) all the way to Tennessee, and an unusually large percentage of their employees moved with them. It would be interesting to know just why so many people abandoned So Cal.

Nissan just moved its American headquarters from Gardena (in LA County) all the way to Tennessee, and an unusually large percentage of their employees moved with them.

A very good friend of mine works for Nissan and just made the move to Nashville. However, less than half of the employees opted to move - the rest quit because they just couldn't give up their SoCal lifestyle.

My friend moved because he saw no future for his two kids in SoCal. Very smart move IMHO.

The housing bubble is simply a symptom of pandemic self-gratification

I have to use that as a post title or something.

I live in Encinitas, CA, where the housing is up 300% in the last 12 years. So high that it would seem you would almost resent your kids! Just Kidding! But a thousand a month per bedroom, when the appreciation ends but the large/bdrm/mo doesn't - in fact, it goes on for essentially FOREVER.
But, it is an excellent neighborhood, with very low crime, absolutely excellent schools (seriously, Excellent!), and low utilities. I live walking near to rail mass transit, and the beach.
It might be worth most of the cost.
3 bedroom, 2 bath, 1979 remodel = $900K.

A long time ago, my mother mused over "temporary buildings" which were all too often permanent at our schools. She wondered why they were seen as such a bad thing, and I understand her point: In this era of flexible housing, where a family might move across the country to follow jobs, does it really make sense to invest millions of dollars in permanent buildings which become outdated very quickly, as well as badly located?

Why don't we have truly temporary buildings instead, as many as we need, and replaced on a regular basis? (That replacement, of course, is the key;; a so-called temporary building that hasn't been moved or fixed in fifteen years is a serious problem.)

Me and my wife are moving to Tennesee, Georgia, North Carolina, or Texas, and we don't even have kids. I am originally from Tennesee and after living in Boston and now the Bay Area for 7 years, I can plainly see from experience that the quality of life in California is embaressingly much lower than where I was born.
I grew up in Nashville, went to public school, had parents who were both school teachers making less than 40k each, lived in a 2 story home with 12 acres of land, an in ground pool, a workshop, and 2 decent toyotas in the driveway.
Moving here to California was a real shocker. The same house that my parents own, a house that is worth less than 150k in TN would sell for several million here. What's more is that the school system is terrible. The reason it is terrible is because of proposition 13, high home prices, poorly paid teachers that have no reason to stay here due to the rising costs, and lastly the buildings themselves are in awful condition.
I now fully realize that what I had back home was about 50% better than what we would ever be able to afford here. Thus we're moving back not only for a better life, but to beat the enivitable tide of california, new york ex-patriots fleeing the now useless states they left behind.
It's amazing to me that a state government could allow their state to get so out of hand and not even lift a finger while it crumbles underneath.
As the state of California has deteriorated, the economy of the " new south" has risen to historical heights. The fastest growing tech region is now in what is known as the I-80 tech corridor in NC, TN, and GA. I would say the future looks bright in these regions, so that's where I'm heading. The rest of the folks who think living a debt-ridden life is worth the sunshine and " progressiveness" that exsists here, then please stay and have at it. I don't care anymore. Rednecks at Wal-Mart are nothing compared to myriads of problems that california has.